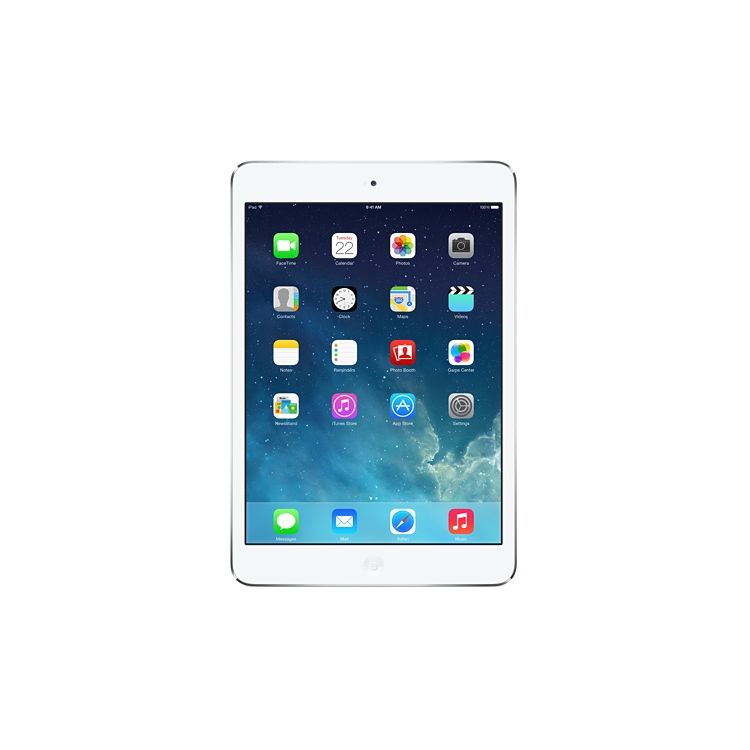 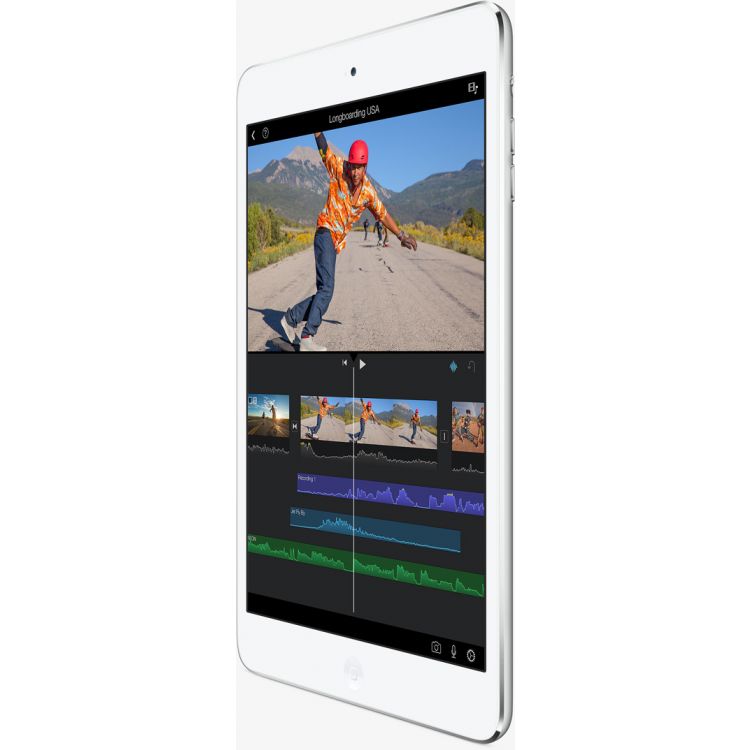 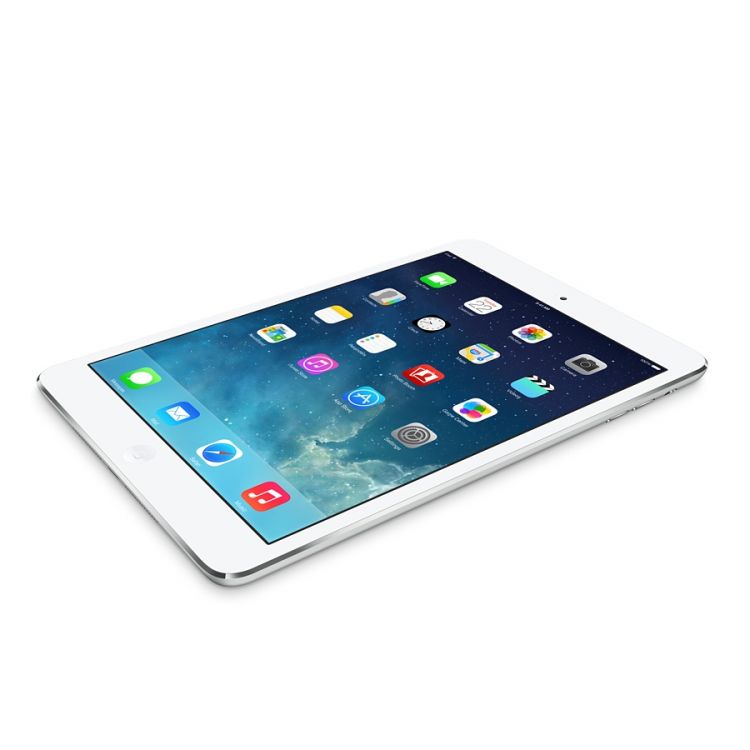 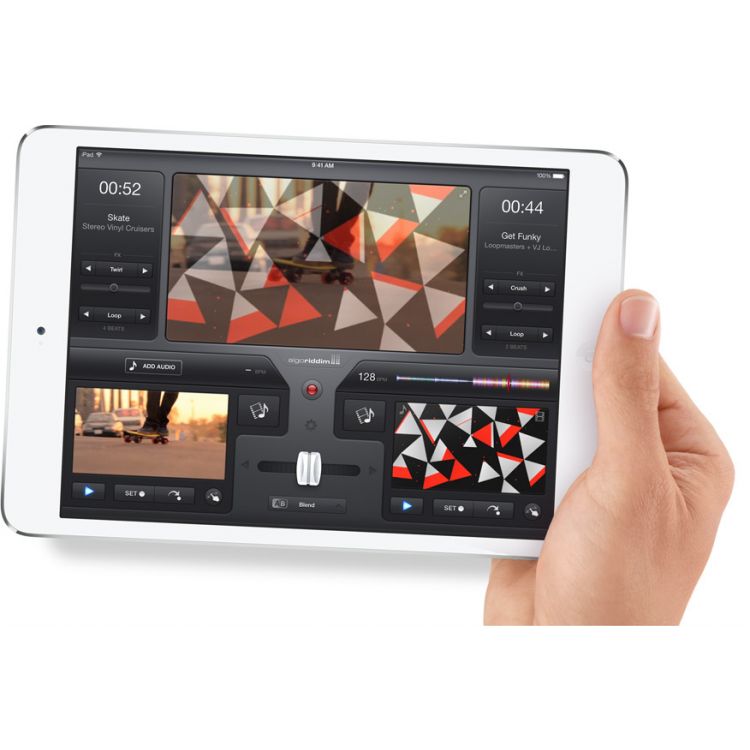 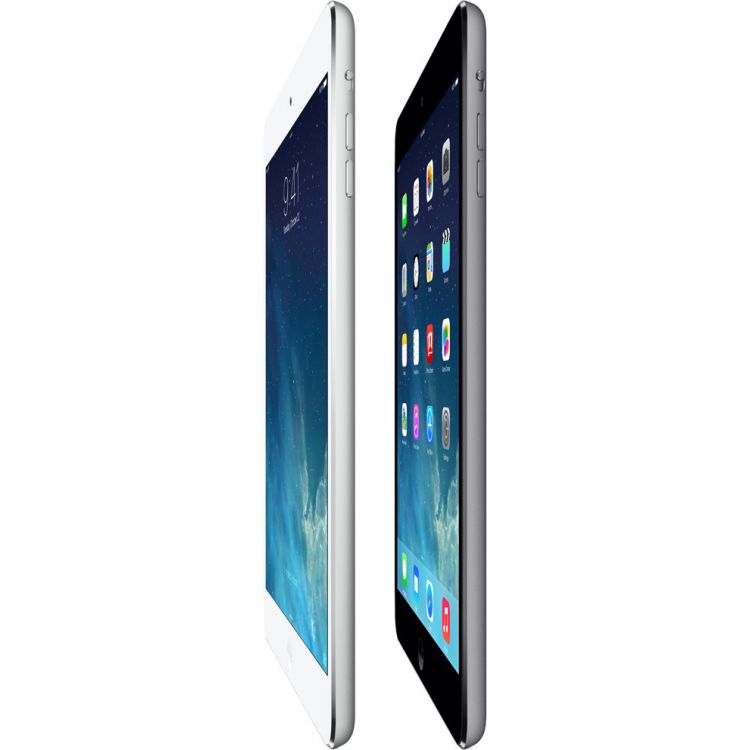 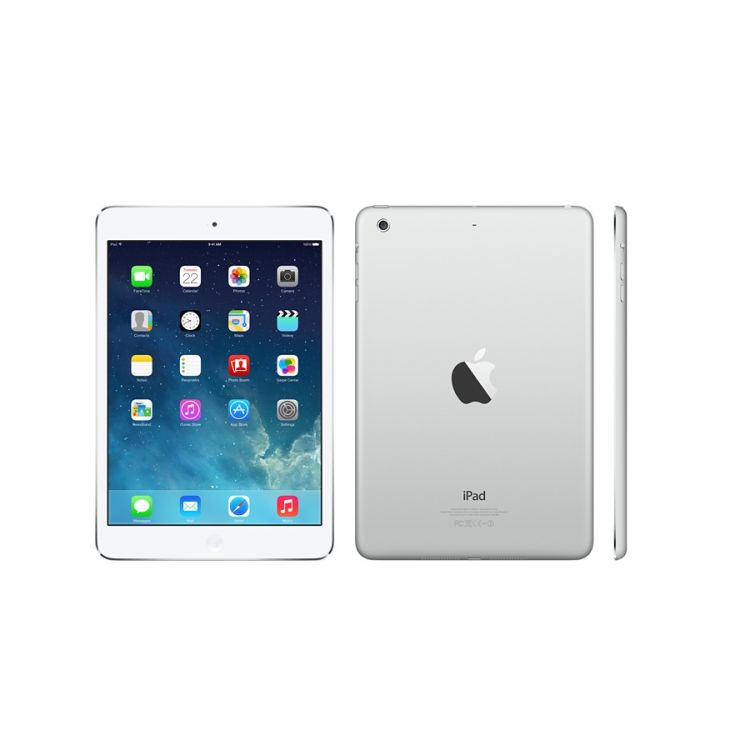 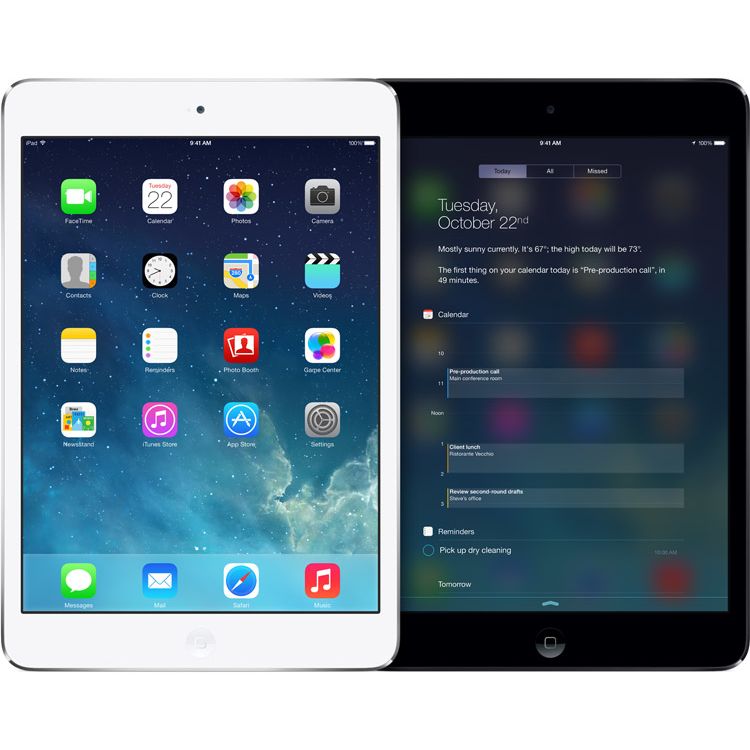 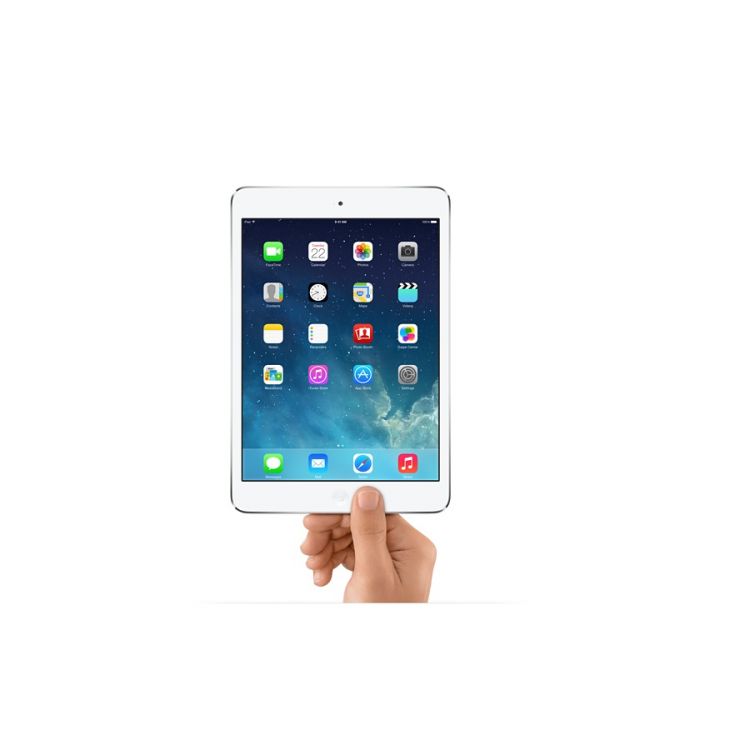 Every little bit as amazing.
Any way you look at it, iPad mini is just incredible. And the stunning Retina display is only the beginning. With a new A7 chip, advanced wireless, and powerful apps — all beautifully integrated with iOS 7 — i...

Every little bit as amazing.
Any way you look at it, iPad mini is just incredible. And the stunning Retina display is only the beginning. With a new A7 chip, advanced wireless, and powerful apps — all beautifully integrated with iOS 7 — iPad mini with Retina display lets you do more than you ever imagined. Feature for feature, it’s identical to iPad Air in every way. Except for its super-portable, hold-it-in-one-hand, still-just-right mini size.

7.9-inch Retina display. 4x the pixels. 1x the size.
Now iPad mini looks even more brilliant in your hand. The Retina display has over 3.1 million pixels — a million more than an HDTV. That’s a 2048-by-1536 resolution, four times the resolution of the previous-generation iPad mini. In fact, the pixels are so close together, your eyes can’t distinguish them. So photos and videos show incredible detail and text is razor sharp. Because the best pixels are the ones you never see.

Thin and light design. We ﬁt more in, but it still ﬁts perfectly in your hand.
We packed so many incredible new features inside iPad mini. It has a stunning Retina display, the incredibly powerful A7 chip, advanced wireless technologies, and more. Yet it’s still thin and light (and mini). It’s just 0.29 inch thin and weighs less than three-quarters of a pound. So while you can do even more, you won’t feel like you’re holding any more.

Incredible performance. Mini is even mightier.
The new Apple-designed A7 chip brings 64-bit desktop-class architecture to iPad. That means up to 4x the CPU speed and up to 8x the graphics performance for everything you do. And still up to 10 hours of battery life to study, play, build, and create whatever you want, all you want.

A7 chip.
The A7 chip takes iPad to new heights of power and speed. Thanks to the A7 chip, apps run faster. Games are more responsive. And everything you do with iPad mini feels quicker, because it is quicker. Up to four times as quick, in fact. But that’s just the beginning. It also supports OpenGL ES version 3.0, enabling detailed graphics and visual effects once possible only on desktop computers and game consoles. And the A7 chip features 64-bit architecture, opening the door for even more robust and powerful apps. Which means even more possibilities for what you can do with iPad mini.

M7 coprocessor.
iPad mini was designed to be on the move. That’s why the M7 coprocessor makes so much sense. It measures motion from your iPad mini by pulling data from the accelerometer, gyroscope, and compass. So your apps can give you a better experience based on the movement of your iPad mini. It’s a task that would normally fall to the A7 chip. But M7 is more efficient at it, which saves on power.

Same great battery life.
iPad mini is powerful, but not power hungry. Even though it’s up to four times as fast as the previous-generation iPad mini, it still gives you the same incredible 10-hour battery life.1 That’s because the A7 chip isn’t just more powerful, it’s also more efficient. So no matter where you go with iPad mini, you’ll have the battery power to go even further.

Advanced wireless. Make better connections wherever you go.
Your new favorite app, book, or movie. Your next FaceTime call or iMessage. Ultrafast wireless lets you access the things you love, right from iPad mini. So more than ever, you can stay in sync and in touch.

Ultrafast WiFi.
iPad mini gives you up to twice the Wi-Fi performance thanks to two antennas and MIMO (multiple-input multiple-output) technology. With dual-band (2.4GHz and 5GHz) 802.11n Wi-Fi and MIMO, download speeds can reach up to 300 Mbps — double the data rate of the previous-generation iPad mini. So now when you want to download a movie, share photos or documents with AirDrop, or just browse the web, your connection is even faster than before.

More LTE bands.
iPad mini with Wi-Fi + Cellular lets you connect to the Internet even if you’re away from a Wi-Fi signal. iPad mini supports even more LTE bands to connect to more cellular data networks around the world.2 Now you can get online at really fast speeds — faster than broadband in some cases — in more places. And plans are flexible, so you don’t have to sign a contract. Some plans even let you share data across multiple devices.

Great apps included. Comes ready to work. And play.
iPad mini is the perfect everyday companion. Because it comes with apps that help you do the everyday things you love to do, like check your email, talk to Mom over FaceTime, or consult Siri to settle a bet. And now iPhoto, iMovie, GarageBand, Pages, Numbers, and Keynote are free with iPad mini.3 So you can write the next great novel, nail your presentation, and compose a score for your home movie — all from your iPad mini. And all these apps are optimized for 64-bit architecture. So they run smoothly and powerfully and make iPad mini — and you — more capable than ever. From the moment you turn it on.

App Store. Over 475,000 adventures await.
Plan a road trip. Study whale migration. Draw blueprints for a building. Or repel a zombie invasion. For anything and everything you do, there’s an iPad app. And new ones are always being added in the App Store. iPad apps are so much easier to use and love, because they aren’t just stretched-out phone apps. They feel like they’re made for iPad — because they are made for iPad. They take advantage of every pixel on the Retina display and leverage technologies like the gyroscope, accelerometer, and compass. And with the incredible potential of 64-bit architecture, this is just the beginning for what you’ll be able to do (and explore, and study, and draw, and zap) with iPad mini.

FaceTime HD camera
Sometimes it’s nice to put a face to the conversation. And with FaceTime video calls on iPad mini, your conversations never looked better. Make a video call over Wi-Fi or cellular and see (or show) every expression on the beautiful display.4 And now the FaceTime HD camera features a next-generation backside illumination sensor with bigger pixels. Which brightens up all your FaceTime chats, selfies, and group Photo Booth shots, even in low-light situations.

5MP iSight camera
We think about what goes into a great shot, so you don’t have to. The 5-megapixel iSight camera on iPad mini was designed to help you capture all of life’s moments at a moment’s notice. Use the Retina display as an easy viewfinder to frame the perfect shot. And quickly swipe between capturing stills or 1080p HD video. Every time you shoot, the image signal processor in the A7 chip works with the camera to make a ton of adjustments and deliver a great picture or video — automatically. You don’t have to think about anything other than who you’re going to share the moment with.
Tech Specs